Holidays at my town. By Jemmaa

“Can I leave now?” Asked Hopper

“What? Oh, Umm… sure” I replied still angry and thinking about Kiki.

“Even better, leave and don’t come back!” I added, barely screaming.

Hopper after hearing what I just said looked at me with an angry look, got out of his chair and walked to the door, then he turned around.

“I wasn’t planing on coming back, your house looks creepy, especially with you inside” He spoke, grinning and trying to hold his laugh.

Hopper shut the door behind him and I was left alone, once again. The kids weren’t out of bed so the town was quiet, very quiet. I wanted to go outside and run to knock on Kiki’s door too see if she had come back, like I did for a month after she left, that was why the neighbor that moved in to Kiki’s old house hated me. I kept remembering moments Kiki had spent with me but my thoughts were interrupted by anger, once again. How could she have done this to me? Why didn’t she come back?

I heard the sound of Margie’s voice continued by the voices of two kids, I looked out the window, neighbors were finally starting to wake up! But it was early, something else was going on.

There was a “cling, cling” to be heard in the sky and I saw kids looking up at the sky yelling other kids to come join. I grabbed my jacket as fast as I could put it on and rushed outside, then a kid looked at me and pointed to the sky and when I looked up I saw a red and gigantic sleight running threw the sky, with reindeer  guiding it threw its flight.

Kids and adults all around town came to see Santa Claus, the reindeer and the sleight flying in the air. After the landing of Santa’s sleight all the kids ran towards him, asking questions, saying how good they’ve been this year… But to my surprise not only Santa Claus came down of the sleight, Kiki did too!!!

“I see you already have seen your Christmas present, Jemma.” He said

I smiled so hard I felt my lips grow larger. Kiki was already off the sleight and running towards me, all the sadness, and angry feelings vanished as we hugged and said stuff like “I missed you so much!” and “We will never be apart again”

Short after Santa gave the presents to everyone and the reindeer had recovered energy by eating and drinking, Santa got on to his sleight and flied away.

“Now, Dasher! Now, Dancer! Now, Prancer, and Vixen! On, Comet! On, Cupid! On, Donder and Blitzen! Now, Rudolph guide us to the next town!” Santa said with a smile on his face.

“Merry Christmas, Santa!” Almost the hole town shouted as Santa flied up into the sky.

After Santa had vanished into the clouds of the sky, all of us went on to the town hall, where there was a party that lasted all nigh! I could hear shouts of joy and voices singing while I partied at the town hall, but Kiki and I weren’t about to break the tradition! We head towards my house being followed by the kids and partied along with the best Christmas I ever had! 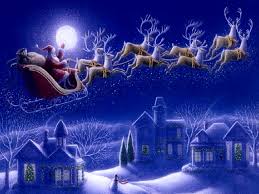 17 thoughts on “Chapter 3: Holidays at my town”

What do you think? Cancel reply

Welcome to my blog! I hope you enjoy it! Please DO NOT COPY
Blogroll: If you want me to add you to your blogroll... Just ask! I will be pleased to do it and even more pleased if you do the same... Thank you!
Contact me:
ACC: jemmabook
E-MAIL: acwwbook@gmail.com
MiniCity: usabook.myminicity.com
Tumblr: nookscrannycrossing.tumblr.com

I own two Animal Crossing games; New Leaf (where I'm most active) and Wild World.
I am happy to arrange any WiFi meeting as long as, if we decide you visit my town, you are willing to follow Lilycott's rules.
My 3DS Friend Code is 0791-3219-7111, so if you would like to play with me, leave a comment anywhere (I read them all!) and we could arrange one :)
*
Happy Crossing!

If you want to leave a comment without anybody but my being able to see it just write "Private Comment" in any part of the comment!
Remember, just writte: "Private Comment" (With the caps, with the space and exactly how it's written here)

Also, to contact me or to wifi, keep in mind the time it is in my country.
Click here to know it!